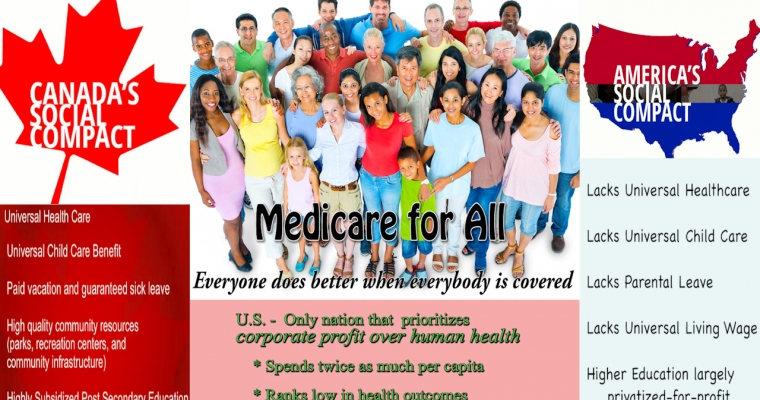 LISTEN
Medicare for All: Everyone Does Better When Everybody is Covered
In Project: Truthseekers - Health Justice Podcast

Four doctors address the effects of the lack of universal health care in the U.S. and the fact that the U.S. spends 1.7 to 2 times more than any other nation, and has worse health outcomes.

The U.S. fractured Social Compact contrasts with every other developed nation, all of which prioritize universal health care. In a 2016 TEDx Talk, Dr. Anthony Iton contrasts the Social Compact of Canada, where he grew up, with the U.S. lack of Social Compact. Upon arriving at Johns Hopkins Medical to study medicine, he is stunned by the atrocious condition of Baltimore inner city, prompting the question "Does your zip code matter more than your genetic code?" regarding U.S. health.

Dr. Alison Galvani, Epidemiologist led a 2020 Study of Medicare for All at the Yale School of Public Health, published in the medical journal The Lancet Health Policy, Feb. 15, 2020. One of the most recent of numerous studies of Medicare for All, the Study revealed savings of $450 billion annually with greatly reduced administrative costs of the single-risk-pool insurance that would cover all U.S. residents.

Drs. Abdul El-Sayed and Micah Johnson in a February 22, 2021 presentation to the Commonwealth Club of California reported findings of their book, Medicare for All: A Citizen's Guide. The authors speak to the powers lined up against universal health care in the U.S. They address the relationship between health care access and other social determinants, e.g., housing, food security and good jobs. They lay out the ways that Medicare for All could remedy inequities in the U.S. health care system.

Coming Podcast - Since the George W. Bush administration, Medicare Advantage plans have been promoted to transfer wealth from public insurance to private insurance, pharmaceutical and healthcare corporations, with the intent to ultimately privatize traditional Medicare. The "DCE-Reach" scheme initiated by the Trump administration has been renamed "ACO Reach" under the Biden administration, both intended to surreptitiously transfer those remaining on traditional Medicare into corporate, private-equity controlled insurances designed to siphon more wealth to corporations at the expense of denied care to the insured.